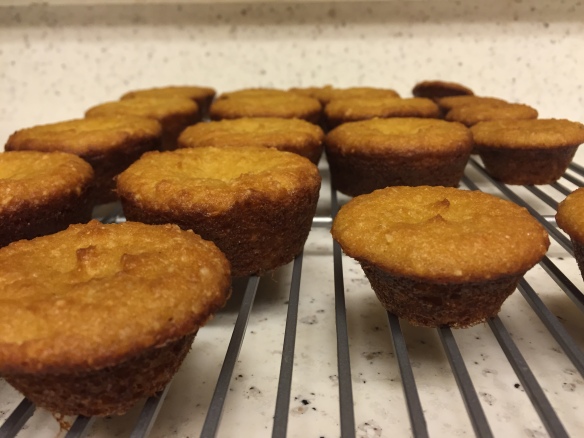 Good Morning! It’s another chili morning here in Park City- I was all ready to post another soup recipe because that is basically what I have been living off the last two weeks. Soup and more soup. Don’t worry I have an awesome black bean soup coming your way soon.. but first I thought you’d enjoy a little something to go along with your soup, chili or stew… and what better than “cornbread”?

Ok, so I was pretty skeptical about this recipe, how can you make CORNbread, you know… without the corn? Well turns out its possible and its also pretty delicious! The first time my friend Kim made this recipe for me I had no idea it didn’t have any corn in it. 10 minutes later I had successfully eaten half the plate and asked for the recipe to make some more! There’s really only one way for you to understand just how epic these muffins are – you must make them for yourself! Almond flour can be found at your local natural food store or Whole Foods- make sure the ingredients say “blanched almonds” it really does make a difference!

Paleo Cornbread Minus the Corn (Serves 4-6)

Recipe from Our Paleo Life

Happy 1 Year Blogiversary, Ski Boots in the Kitchen! It seems crazy to me that a year has gone by since I decided to start this blog. My first post was one of my favorite childhood fall recipes- Stew in a Pumpkin… I never thought a year later I’d be posting my 74th recipe! Stew in a pumpkin was a recipe my mom always made for us as kids and she still makes it for my nieces and nephew- we were always so excited to see the whole pumpkin on the table filled with stew! It’s usually a good excuse to carve pumpkins too! 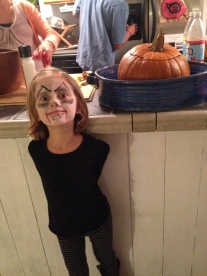 My niece dressed up for Halloween and ready to eat Stew!

Stew in a Pumpkin

Nothing says fall better than a Sunday afternoon watching football and eating some hearty stew or chili. One pot wonders, crock pot magic- whatever you like to call it soups are easy, cheap and feed all the hungry boys that have come over to your house, taken over your couch and drink all the beer! But serving chili without cornbread is like serving lamb without tuna fish… wait I think I meant to say, its like serving spaghetti with out meatballs (that was for all you Big Daddy movie fans…) anyways, you get the idea.

What is worse than chili without cornbread? Dry, boring, stale cornbread that tastes like sawdust. That is kind of how I feel about a lot of cornbread, ohhh but not this recipe. The secret ingredients? Well not that secret because I’m going to tell you… Crushed pineapple, creamed corn and pepper Jack cheese!

Spread mixture into a baking dish 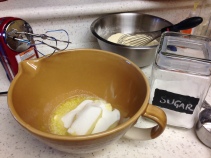 Cream the butter and sugar together

This recipe was one my mother got out of Blanchard’s Cookbook but it was also one of the recipes I got at my bridal shower! Everyone that came to my bridal shower was asked to bring a copy of their favorite recipe for me to add to my collection! (that way I’ll always know your favorite dish when you come over for dinner!) This was the recipe Diane S. brought for me! So thank you Diane and mom for the recipe because it has become one of my favorites too!

You’ll never think of cornbread the same after eating this deliciously moist and yummy treat! It would also make a great addition to your holiday meal and it freezes well too! So make up a big ol’ pot of chili, a big ol’ batch of cornbread and get the best spot on the couch. Enjoy!

*to freeze- let cornbread cool completely before cutting and removing it from the pan. Double wrapping in plastic and freeze. 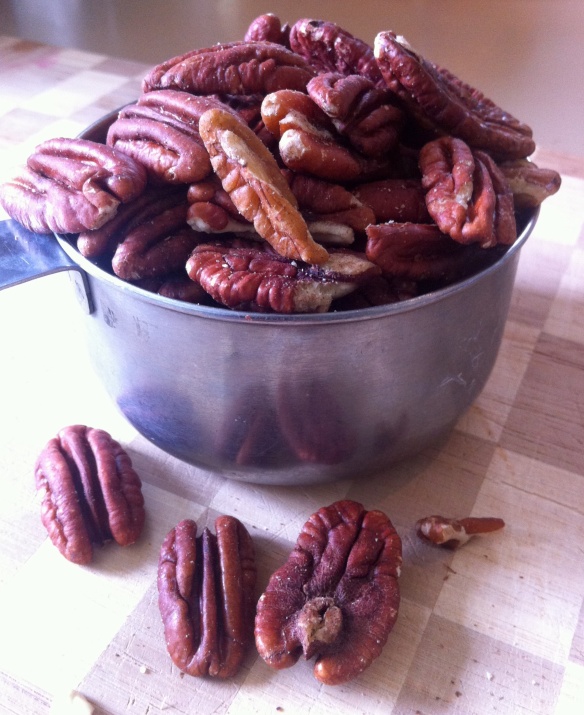 Another very important part of Thanksgiving day… Stuffing. For years I have subscribed to the ultimate food lovers guide (food porn) magazine… Bon Appetit. Nothing compares to opening my mail box and finding it waiting with wonderful recipes, restaurants and ideas. But I am guilty… after drooling over every amazing (and complicated) recipe, I revert back to my collection of familiar cook books and my unused Bon Appetit stack grows. So I’ve vowed not to be intimidated by the long lists of ingredients or seemingly complicated recipes and try to cook at least ONE (I know its not a lot but its better than NONE) recipe each month. So in honor of my commitment… this stuffing recipe is from the November Bon Appetit Thankgiving Issue, it turned out not to be as complicated as I though and its absolutely delicious! This can be made 1 day ahead too, which makes it even better. Enjoy!

Meanwhile, cook sausage in a large skillet over medium-high heat, breaking up into 1″ pieces with a wooden spoon until browned, about 8-10 minutes. Drain fat and transfer to bowl with cornbread but do not stir.

Heat 3/4 cup butter in same skillet; add onions and celery (and leeks if you choose to add them) and saute for 10 minutes or until soft and they begin to brown. Add to bowl with cornbread.

Turn oven up to 350 degrees. In a small bowl whisk 1 1/2 cups broth and eggs together. Fold gently into cornbread until thoroughly combined taking care not to mash cornbread (mixture will look wet). Transfer to buttered baking dish, cover with foil, and bake about 40 minutes or when a thermometer inserted into the center of the stuffing reads 160 degrees. If making a day ahead, remove foil after baking and let cool. Cover and chill. Reheat for 15-20 minutes or until stuffing is warm all the way through. 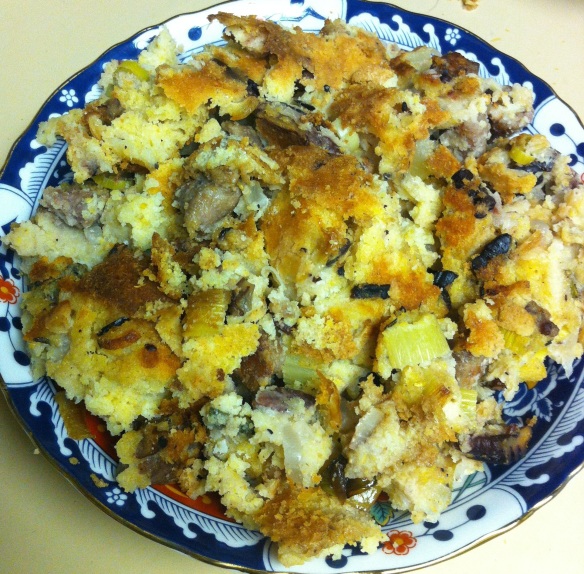 Turns out stuffing is really difficult to photograph and still look appealing (Even though the magazines picture is perfect, go figure). While this looks like a bowl of mush…It tasted AMAZING and looks much prettier in person.

Welcome to Ski Boots in the Kitchen, I'm Perry! You can find my cooking and life adventures at high altitude here. I love food, wine & the mountains, I hope you'll join me in my adventures!

When I’m not in the Kitchen… 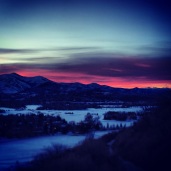 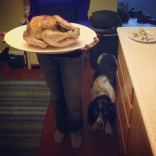 Waiting for something to drop 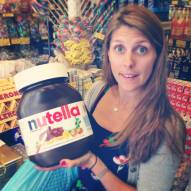 Meet my family, my husband Jake and dog Piper