Don’t you hate when you get to the store and you realize your recipe calls for two pints of something and all they have are cartons measured in milliliters or quarts and you’re standing in the dairy section on your smart phone trying to ask Siri what the hell you should do? Yes, I’ve been there! So here is your cooking cheat-sheet for confusing measurements, ingredients and terminology! 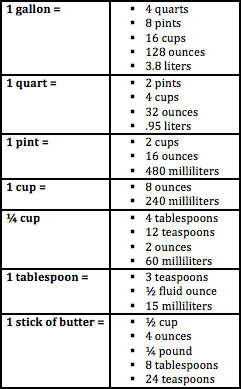 Aioli– A garlic mayonnaise, sometimes made with other herbs and typically served with meat, fish or vegetables.

Blanch– To cook something for a short period of time in boiling water.

Bechamel– One of the five ‘mother’ sauces of French cooking. It is a white sauce made with milk and a Roux (see below) of butter and flour.

Carpaccio– An Italian dish, usually referring to raw beef that has been sliced paper thin.

Ceviche– a Latin American recipe for raw fish and seafood marinated in citrus juice, mainly lime and lemon juice. The acid in the citrus juice alters the structure of the proteins in the fish, essentially “cooking” it.

Chiffonade- Thin strips of vegetables or other ingredient usually used as a garnish.

Confit– A French method of preserving meat (usually goose, duck or pork (or chicken wings)) where it is salted and cooked in its own fat.

Coulis– a form of thick sauce made from puréed and strained vegetables or fruits.

Deglaze– Getting the stuff off the bottom of the pan by adding broth or wine.

Emulsion– A mixture of two liquids that don’t normally mix well. It is done by rapid stirring and slowly pouring one liquid into the other.

Espagnole- Another one of the five ‘mother’ sauces. This is a brown sauce traditionally made with a rich meat stock and mirepoix (see below) of vegetables and thickened with a brown roux.  The dark- stock based sauce.

Haricot Verts– I’ll never forget the time my sister-in-law and I were making a potato and green bean salad and she looked at the recipe and said, “Oh Sh#t, we forgot the Hair-Cot-Verts!!!” Yes- its just a fancy name for Green Beans.

Julienne– A style of cutting veggies or meat in to very thin, matchstick pieces.

Mirepoix– The classic French trifecta of diced carrots, celery and onions used as a base to many stocks and dishes.

Roux– A sauce made with melted butter and flour and used as a thickening agent.

Veloute– The last ‘mother’ sauce. Made using beef, chicken or fish stock and then thickened with a roux. the light- stock based sauce.